Aug 2020
Eight Cayenne’s and two Jeeps met early Saturday morning, August 15 at the Rudy’s parking lot for the Tarryall Off-road Tour (only the last 10 miles were actually off-road). It was a cool morning and not a cloud in the sky at 8 am. After the drivers meeting we headed up Hwy 24 towards Divide and then made the turn towards the Tarryall reservoir down the road. We took a short break at the reservoir’s rest stop, and the Sontags in their Jeeps left the group for some serious off-roading of their own. The eight Cayenne’s continued on to Hwy 285; one Cayenne left the group as we turned off the Boreas Pass exit.

We hit the small town of Como before it turned into a rocky dirt road as we climb towards Boreas Pass. The Cayenne’s got plenty dusty but nothing that they couldn’t handle. We all made it to the top and found parking to look around the historic site. Thirteen of us stayed in the area and had an impromptu picnic lunch. Other than the smokiness from the Colorado wildfires, it was a perfect day with perfect temperature up on the mountain. This tour definitely has the possibility to replace our current planned off-road tour for Treffen in 2022. It was worth noting that the group made every light together and stayed intact the whole trip (other than those prearranged departures). Everyone was impressed and the road between Hwy 24 and 285 was scenic and in good condition. Thank you T.J. Veldheer for setting up a great tour.

Jul 2020
Mike Moore led this tour through multiple scenic mountain passes on the way up to Breckenridge. It started with a beautiful morning for our drivers meeting at Bear Creek Park. The roads were great and some of us even got to see a moose at the top of Kenosha Pass. The expected storm rolled in by the time we finished at Breckenridge.

Jun 2020
The first AMR tour of 2020 took place on Saturday, June 26. Arnie Easterly, AMR Tour Chair, organized the tour and led the first group with Nate Adams leading a second group. After the drivers meeting near the World Arena, the groups went south on Hwy 115 towards Bishop Castle in the Wet Mountains. The tour then headed to Canon City where it ended and individuals went to lunch on their own. In all about 27 cars participated on the tour and we collected $430 donations for our charity of the month, Care and Share Food Bank. Thank you to all the tour volunteers and everyone’s generosity with the donations; and especially to Arnie for a smooth start with the new COVID safety procedures.

Alpine Mountain Region held its annual Fall Mystery Tour in late September. It’s a mystery, where participants register for the tour but don’t know their route or final destination until after lunch the day of the tour. The tour challenges the participants to guess the destination and win prizes for the three closest guesses. The destination this year was Glenwood Springs, Colorado. 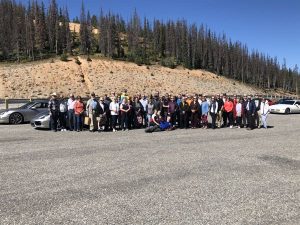 Twenty-seven Porsches and fifty-three PCA members joined the fun, traveling on some of Colorado’s best driving roads. We had members joins us from across Colorado including the western slope and even some from the neighboring Rocky Mountain Region. After departing Porsche of Colorado Springs bright and early, the tour traveled south on Colorado Highway 115 where it joined US Highway 50 West towards Monarch Pass and lunch at the Palisades restaurant in Gunnison. After lunch, the tour headed further west to Colorado Highway 92 (also known as West Elk Loop), a great twisting two-lane road that follows the northern rim of Black Canyon of the Gunnison National Park and seems like it was made just for Porsches. An added benefit is that this road generally has very light traffic. The tour ended traveling north on Colorado 133 toward Glenwood Springs. 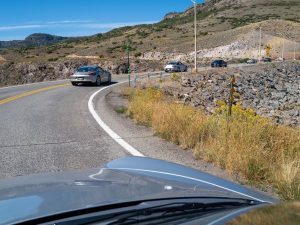 The tour made stops at the top of Monarch Pass and in Marble, Colorado. Monarch Pass rises to 11,312 feet with great views of the Sawatch Range in the central Rocky Mountains. Marble is the location of the Yule Marble quarry from which the town was named. When it was in operation the quarry supplied stone for the Tomb of the Unknowns and the Lincoln Memorial in Washington, DC, and is one of the purest marble quarries. The tour members had dinner at the Rivers restaurant along the Roaring Fork river and stayed overnight at the famous Glenwood Hot Springs Lodge, home of the largest outdoor hot springs pool in America that for over 100 years has been one of the primary reasons to visit the area. The historic Glenwood Hot Springs were used by the Ute Indians and its current day visitors as a source of rejuvenation and healing.

The Colorado high country was having a somewhat late fall so the tree and scrub oak colors were not at their peak, but we had some fantastic crisp fall weather and great driving roads to enjoy our Porsches and fellow club members. Until the next Mystery Tour in 2020!

By Alex Ching
Photos from multiple contributors
May 2019

AMR made a first time tour to the famed Highway of Legends on May 19 with 35 cars and 67 people, including our own Zone 9 Rep, Rich Sanders.

Karl and Kathy Klepfer led the daylong trek from Porsche Colorado Springs in the first group with Nate and Lore Adams leading a second group. The tour headed straight south on CO-115 to Florence for its first stop and then CO-67 to Wetmore before turning on to CO-96 the old mining town of Westcliffe. As we emerge from the Wet Mountains on CO-96, the group was treated to a majestic view of the snow-capped Sangre de Cristo range. At Westcliffe we turned east to circle around the massive mountain range for our next stop at Walsenburg, which is the starting point of the 82-mile Highway of Legends scenic byway.

As we pass through the town of La Veta, we came to our lunch stop at the La Veta Inn. The inn and restaurant is owned by AMR members Ryan and Ali Parker, who were unable to join the tour due to car issues but stepped in at the last minute to host our large group for lunch after the original venue dropped out. A big thanks go out to Ryan and Ali.

After a fabulous lunch of soups, salads, chicken wings, and sandwiches; we were back on the byway to skirt the Spanish Peaks – the twin mountains with striking rock formations, high mountain lakes, quaint resort towns, and scenic river canyons, mesas, & plains. We also passed through the Cokedale National Historic District where the arching alcoves of coke ovens resembles the Roman aqueducts. The rollercoaster ride ended in an hour and a half at the Purple Toad in Trinidad, where many stopped for refreshments before heading home. Despite the daylong drive, feedbacks were positive and many members were impressed with the organization of the tour. We look forward to a repeat of this tour in 2020; hopefully in the Fall to catch the turning leaves.

Check out the Rallies/Tour page for more photos from the tour.