Let’s see, a September road trip in my ’89 911 from Colorado Springs to Monterey, a visit to the amazing Laguna Seca Raceway (sorry Mazda, it’s always going to be just Laguna Seca to me), watching more than 60 years of Porsche race cars at speed, seeing and maybe meeting some of Porsche’s legendary race drivers. This is what awaited me as I purchased my ticket for Rennsport V, Porsche Cars of North America (PCNA) festival of Porsche racing history.

This year was the fifth iteration of the Rennsport Reunion, and from those I talked to who’ve been to previous Reunions, it just gets better and better. Held every three or four years (or whenever the spirit moves PCNA), the first reunion was held at Lime Rock, Connecticut in 2001. That event was the brainchild of Bob Carlson (of Porsche Public Relations) and Brian Redman (of 908, 935 and 917 racing fame). In that first year it attracted more than 300 historic Porsche racecars of all vintages, generations of Porsche racers, along with more than 18,000 fans. The next two Reunions were held in at the Daytona Speedway, in 2004 and 2007, respectively. For its fourth Reunion, the event headed west in 2011 to Laguna Seca, where once again more than 300 racing Porsches were entered along more than 50 legendary racing drivers and 35,000 fans. This year’s event at Laguna Seca again drew more than 300 (yes, entries are limited) Porsche racecars and a slew of legendary drivers, both current and retired.

Okay, enough history. The trip out was (thankfully) uneventful, as driving through the California desert is never all that much fun, and definitely not a place to break down. My little 911 never missed a beat, though I was reminded that AC in an air- cooled 911 is more suggestion than reality. So, back to the tried and true method: both windows down.

My first hint that something special was happening was when I pulled into a La Quinta in Paso Robles (about 100 miles from Monterey) on Wednesday night (just after passing the notorious intersection where James Dean crashed his Spyder) and counted more than a dozen Porsches in the parking lot. My next indication was the following morning when I pulled into a rest stop on highway 101 and parked along with several other Porsches, all headed for Monterey. Talked with a nice couple up only for the day from SoCal, but our conversation kept getting interrupted by Porsches honking and waving from the highway. Yes, something special was in the offing.

I arrived in Monterey around midday on Thursday, the day before the event officially started. The timing was perfect for a run up the coast about 50 miles to Scott’s Valley, to visit Bruce Canepa’s shop. For those not familiar with Bruce Canepa, he runs a very high-end restoration and race preparation shop and sells equally high end Porsches and other exotic and historic cars. Bruce opened his entire facility (and what a facility it is!) to the public for the entire week leading up to the Reunion. First stop was his personal museum with an eclectic collection of racecars of all types (several of his more significant Porsches were absent, having been shipped to the track for Bruce to race, and yes, he’s an exceptional racer). Then I had to keep from drooling over his amazing show room of cars for sale. Later, as I was wandering around in his race/restoration shop, I noticed a guy in a t-shirt, shorts and flip-flops being given a tour by one of the Canepa employees. Didn’t look like anyone special, only after I did a double take did I realize it was Bobby Rahal. It was definitely shaping up to be a great weekend.

The next morning I made my way to the track, arriving at about 7:15, and thinking I’d be one of the first there. Wrong. There must have been a couple of hundred air-cooled 911’s in the corral as I pulled in and parked. From the paddock I could already hear the sounds of racecars starting up and the PA announcer directing the first groups to the grid.

After wending my way through the vendor area (to be visited later) and finding some much-needed caffeine, I found the paddock area, which was completely open to the public the entire weekend. What a cornucopia of sensory treats. Ah, the smell of racing fuel and burnt rubber in the morning! Since this was a reunion, the race cars were all historic, but to varying degrees, with some cars being quite modern, including a couple of LMP2 cars from 2007 and 2008. As someone who came of age in the ‘60’s, my primary interest was in the older cars. I actually recognized some of the cars that I saw race at Riverside Raceway in late 60’s and early 70’s. I was particularly interested in the Gmund Cup Class (mostly 356s, but some specials like Devin, an Autodynamics Formula B, a Cooper Pooper, a Glockler , a Platypus (really), and, of course, a number of priceless 550A, RS60 and RSK Spyders, including one with center steering).

The other group that held my particular interest was the Eifel Trophy class, made up of mostly 911s from the mid to late ‘60s and the 914-6 giant killers, a couple of which were in their original signal orange Porsche/Audi Dealers livery from back in the day.

Completing my personal trip down memory lane was watching the Weissach Cup Class, composed of 906, 908, 910 examples, along with a couple of surprisingly quick early ‘60’s Elva Porsches. In this class, of course, was the mighty 917, of which there were several, including a couple in Gulf racing colors, one of which was owned/driven by the aforementioned Bruce Canepa.

The action for the weekend wasn’t limited to just the racetrack. The Porsche factory brought a number of significant cars from its museum to the event for display to be joined by other privately owned cars with rich racing history. Some of these cars actually raced, including a Mark Donohue liveried ’73 917. Among the other cars on display was ’72 Can Am 917, campaigned by George Follmer, along with a very rare 356 Carrera Abarth GTL, a 904 GTS, a number of 550 Spyders, including one in its Carrera Panamericana livery and several 34, 935 and 936 racecars. The star of the show was the 919 fresh off its overall win at LeMans a couple of months earlier.

Since this was a reunion, I was truly excited to see racing drivers from the 60’s to the present day. The lines for autographs were incredible and the sessions went well beyond their scheduled time period. What was particularly gratifying was that these drivers seemed to be having a great time, meeting old and new fans (and talking smack to each other about races that took place 50 years ago). Seeing world class drivers I used to watch in person, like Vic Elford, George Follmer, Elliott Forbes Robinson, Brian Redman and others that I only saw on TV or read about in dog eared copies of Road & Track like Jurgen Barth, Jacky Ickx, Derek Bell and Hurley Haywood, all together in one place, was priceless. I’m not a big autograph fan, so I stayed out of the autograph session melee, but one driver I missed and would have like to have said hello to was Dick Barbour. As a starving college student, I knew Dick before he became THE Dick Barbour of LeMans and ALMS fame, back when he owned a 4-bay Porsche repair shop and accessory boutique (Automotion) in San Diego and was campaigning a 356 in CalClub SCCA races at Riverside, and I was one of his customers just trying to keep my tired 356 coupe’s engine from blowing up. Maybe next time.

The Laguna Seca racetrack itself is amazing. Though I lived in the San Francisco Bay area (many) years ago, I never made it to Laguna Seca. I could kick myself now. The Corkscrew portion of the track is considered the prime location to watch the racing, with good reason. The track drops in elevation about the equivalent of six stories, while the drivers navigate a series of tight twisties, building speed as they descend. Gut wrenching doesn’t begin to describe it.

The Rennsport Reunion is an absolute must-do bucket list event for any Porsche racing enthusiast. It is total Porsche immersion for three solid days. The vendors are all Porsche-centric, the cars are all Porsches and the drivers all have a history with Porsche. PCA had a nice hospitality center (free bottled water!) and PCNA did a fantastic job of organizing the event. Having just returned a week earlier from a tour of the Porsche factory and museum, where I was a bit disappointed in the paucity of Porsche racecars, I now know why. They’d already been shipped to Laguna Seca. As I noted earlier, PCNA only holds the Reunions every four years, or so. I’ve already got my bag packed 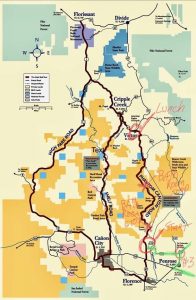