By Alex Ching
March 2021
As Webmaster I’ve seen my share of phishing emails and scams come across my mailbox. Most of these involved so called illustrators or photographers claiming our website is using their property and they will sue us unless we stop or pay them. Others include a member of the Board asking other Board members to purchase gift cards and then emailing the card codes back to him/her (close examination of the originator’s email address reveals the address was not from that person). Some of these are very convincing as the scammer would use terms that the actual person would have used in his/her email. In the latest round of scams, we are now receiving threats of losing our website’s domain name if we don’t pay soon, and the best one of all–a buyer for one of my advertised items on the Alpine Mart classifieds sending me a check that turned out to be a ruse.

I received an email from a potential buyer for my Cayenne wheels named “scott t****r”, who said he will FedEx me a check for the purchase on March 16. After several emails he gave me a FedEx tracking number and I received the package on March 18. When I opened the envelope it was not a check from “scott t****r” but a check for eight times the asking price from some financial officer named “Judith G******n”, along with a letter with instructions to send my deposit receipt. This raised a red flag for me; actually, there were several red flags that came up while corresponding with “scott t****r”. The check from Bank of America looked real enough and the FedEx tracking number matched the one “scott t****r” gave me. I then did some research on the BBB website and it showed scammers sending fake checks over the purchased amount and would request refunds from the sellers, but this one went further by wanting a copy of my deposit receipt. Do not fall for this scam! I did not lose anything over this experience except I did give out was my address and phone number. This is one case of “sellers beware” and I filed a complaint on the Colorado Attorney General’s website. I would encourage anyone to do the same with the CO AG if you have been a victim or a potential victim of a scam.
Back to eTrails

By Alex Ching
January 2020
We’ve been needing new tires and with Kim winning the annual AMR tire raffle at the Christmas Party, I took her Cayenne down to Porsche Colorado Springs for an estimate. After placing an order with Marcus, I make my usual rounds to say hello to everyone I know. My first stop is usually Ted’s office. As we’re catching up on the latest when he suddenly asked if I had some free time and then proceeded to hand me a set of keys to Porsche’s latest masterpiece, the Taycan Turbo.

At first glance, it does not look much bigger than a 992, but all the classic Porsche elements are there – the sloping front end (albeit with rectangular headlights and distinctive look from the Mission E), the contours, and the Cayman-esque quarter panel and back. Its profile is more akin to the 911 than the Panamera despite its length. The all-digital instrumentation is utilitarian and fairly easy to navigate. The Taycan is eerily quiet but it does have a noise generation option to give it some “purr” and to give the driver a sense that the car is alive.

The test drive is nothing short of spectacular. Coming out of Motor City Dr onto East Motor Way I had a clear road and took advantage of it. I press down on the e-pedal? I felt the torque push me back in the seat and heard Ted lightly gasped, and as the car approach triple digits toward Tejon I tested the brakes and they functioned flawlessly. Love those Porsche brakes! Every aspect of the Taycan was instantaneous and smooth but unfortunately, the rush hour traffic did not allow for more spirited test drive. If you’ve never driven an high performance EV, I would highly recommend checking out the Taycan. I know I’ll be taking a second look. 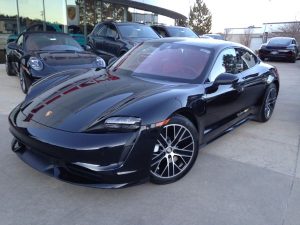 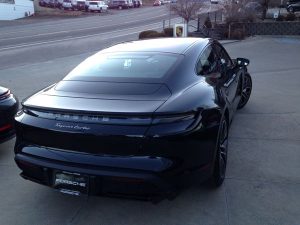 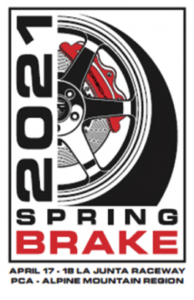