Getting 50 AMR and RMR members out on a February weekend to go for a drive?  Sounds crazy, perhaps.  Well, Porsche people are a hearty breed, and they proved it on February 9th in Colorado Springs.

We gathered at Porsche of Colorado Springs to pay tribute to Pikes Peak, known as America’s Mountain.  Specifically, we gathered to learn a bit about the biggest race in Colorado – the Pikes Peak International Hill Climb.  Did you know it is the second oldest motor race in North America?  That teams from almost every continent come to Colorado Springs every year to compete in it?  There were so many things to learn.  Three of the Porsche’s set to compete in the 2013 race were there in person: Chris Lennon’s 911 RSR Replica, Fred Veitch’s 996 Turbo, and Robert Prilika’s Cup Car.  Chris led a presentation, talking all about the history of the race, some of the unique aspects of it, and the challenges that car and driver face which aren’t normally encountered in a more traditional race.  Attendees got to feel what it was like to race up the mountain through some in-car video shown on the big screen.

Then, it was time to climb the mountain ourselves.  We all piled into our cars (mostly Porsche’s, and even including one Ferrari 458 Spider with its top down), and headed to the mountain.  Being Colorado, what started as a comfortable mid-40s day at the dealership quickly changed.  We had a great 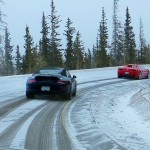 drive to about the half-way point, when what did we encounter?  Snow!  Did that stop us?  Of course not.  Even those in RWD Porsche’s plowed (almost literally) ahead.  Eventually, we were turned around by the rangers, but not after having a blast!  One the way back down, one participant had a tire literally fall apart on him, but we were able to get him back on the road with his collapsible spare in no time.

Special thanks go to Porsche of Colorado Springs for providing a perfect place to start the tour and display the cars, as well as a delicious lunch for all who came.